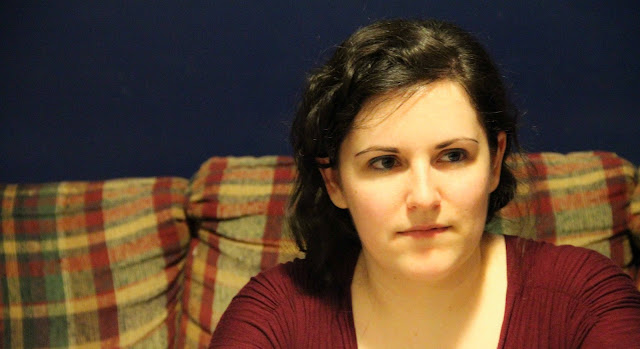 1.  Have you ever had a transcendent experience?  If so, what happened?


I've had some pretty intense experiences in the audience at a play, but am not sure that counts as transcendent. However, if it does, I remember one night in particular - it was the first performance of the John Doyle-directed revival of Company after the Tony Awards. The show had won for Best Revival, but Raul Esparza (who had been the favorite to win) had not won for Best Actor, and the producers had announced the show was closing in two weeks. On an impulse, after work I went to the box office to see if I could snag a student rush ticket to the show - I met several others there who had done the same thing, also on an impulse. Before the doors opened to let us in to the theatre, I could hear applause within. That night in the theatre, there was a feeling of cameraderie and support in the audience - we had most of us come to say "We are here for you. We wish you would stay longer," and to Raul especially, "We think you should have won." Near the end of the show, when he finished singing "Being Alive," the audience response was immediate and intense - we were roaring into applause, and it did not taper and it did not stop - for a full minute we clapped like that, and then - as one - we all stood up. This was my first time being part of a standing ovation that occurred during the show, and I think it was the first time for the cast as well - Raul Esparza was visibly taken aback, and then he started sobbing. Never before, and never since, have I felt as in tune, as connected, with an entire room full of strangers.
2.  If you had to pick one sense and lose all others, what would it be?


This one kills me, as the loss of any breaks my heart. But I think perhaps sight - I'm a very visual person, I save pictures in my memory of past events, of art, of people - and I'd hate to lose that faculty.
3.  What is your favorite attribute in a person?


Integrity. I think it encompasses a lot of other attributes as well - like honesty, self-awareness, intelligence, loyalty, consistency - Integrity - someone who is fully him/herself, without contradiction or apology.
4.  Describe your happiest accident.


Not exactly an accident, but - on a school assignment, several people from my class were at DIA, exploring the roof exhibit - Judy, one of my classmates, and I discovered that the cyllindrical glass enclosure on the wooden deck had a hidden door that rotated open. We both crept in and lay on the deck in the sun, like cats on a summer day. We stayed there for maybe two hours, just talking, and eventually ended up going back to my dorm and watching Talented Mr. Ripley together and getting food. She's now one of my best and most important friends.
5.  If you had to choose one personal object to leave behind when you are gone, what would it be?
I don't want to leave! I would like to leave something good behind me - something I made, something that's worth something, something someone will care about. A book maybe. But you wanted a personal object. Perhaps one of my notebooks - I had these hard-bound notebooks that I would collect lyrics, poems, quotations, funny things people said, and postcards and pictures - I made twelve of them through high school and college, and still carry some of them with me in New York.
Posted by Jennifer (Skura) Boutell at 12:55 PM